Vilnius is the first Lithuanian city where a new innovation has been introduced to the streets, in the form of a measure to ensure the smooth flow of vehicles at junctions and reduce traffic congestion. Biseris UAB plans to install the additional road-safety measures on the city’s streets by September 1. In particular, the junctions will be marked in a special way in areas where most road-traffic violations occur as a result of drivers having to stop, thus causing trouble for drivers of other vehicles by impeding traffic. 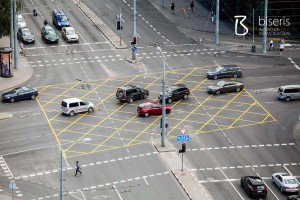 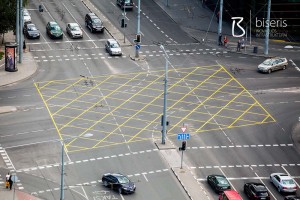 Saulius Žiūra, the photographer of the municipality.

The new marking of intersections with yellow lines will show the area where entering is prohibited if there is an obstacle there or nearby that will force the driver to stop at the intersection and interfere with traffic of other vehicles, except when it is necessary to turn left at the intersection. In addition, panels with information about the new labelling will be installed.